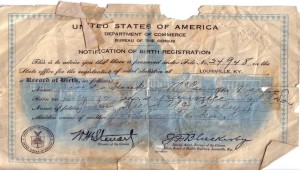 The Government created your STRAWMAN, STRAW MAN, identification from your Application of Live Birth when you were born and accepted by the government agent, Physician. Your Birth Certificate, a Negotiable Security Instrument, was created by the State Government with your name in ALL CAPITAL LETTERS, making you a Legal Fiction Trust corporation in commercial on the admiralty seas, a non-human imagination, with your ALL CAPITAL NAME spelled as any and all corporations. This way the government could borrow money from the FEDERAL RESERVE to convert your birth certificate into a Government Bond to sell on the Stock Market to pay off the bankruptcy debt of the UNITED STATES corporation and to allow the banks to draw money using your signature representing credit or money from your STRAWMAN, STRAW MAN corporation name reserve and exempt account and birth certificate bond government trust where all your money is kept without your knowledge

The banks use your signature, by monetization and fractionalization, with your unknown permission, to create money out of thin air by use of bookkeeping accounting entries under Generally Accepted Accounting Principal entries, GAAP, in commerce and trade.

The banks use the guise of the full faith and credit of the UNITED STATES Government (See the Picture Below) even though there is no gold backing, just faith in a bankrupt corporation; thus, making you liable, as a surety collateral slave, to pay back the money, credit, and debt of the UNITED STATES Government corporation with your spirit, energy, and labor as your secret STRAWMAN, STRAW MAN, legal fiction identity.

You can give this Legal Fiction I.D. back to the government and allow the UNITED STATES to pay off your debts lawfully.

“This E-book is for informational and educational purposes only. It will give information to give back your Social Security Number and become a sovereign by terminating your STRAWMAN, legal fiction with the government; and the cost of processing your STRAWMAN termination government forms to become a FREE Man or Woman. (With these government forms by his side, the police could not give a man a speeding ticket, because his STRAWMAN was not in “The SYSTEM”.) If you decide to pursue the entire STRAWMAN termination procedure, there are processing costs for our processing company to process the government forms to get you STRAWMAN MONEY DEBT CREDIT FREE. We are a processing company and not attorneys nor accountants and do not practice law or give legal or accounting advice!”

Your STRAWMAN, STRAW MAN, identity is a Legal Fiction in commercial law, a false person or corporation, a Capital Corporation Identification, [not your real name at birth given under God by your parent(s)]. Your STRAWMAN I.D. was created by the State that created a second original Birth Certificate for the UNITED STATES Government under the Uniform Commercial Code, UCC, the code of laws that the FEDERAL RESERVE Bank Attorneys created in order to make you a human slave to be used as corporate labor collateral to pay off the UNITED STATES Corporate Bankruptcy debt using your birth certificate as a government bond to be sold on the New York Stock Exchange with the use of your Social Security Taggingand Tracking number at your birth.

All corporations are legal fictions and are created using an ALL CAPITAL LETTER name such as your STRAWMAN, STRAW MAN, Legal Fiction identity on all government documents. Look at your driver’s license, marriage license, or any government documents as proof. The UNITED STATES has been a private corporation since 1881 as defined in Black’s Law dictionary, Act of 1881, and 28 U.S.C. §3002/15 (A) (B) (C) and is not one of the 50 States. The UNITED STATES does control the 50 States thru your ignorance no matter which state you live or were born in.

You are a debt slave-making money for the banks under the full faith and credit of the UNITED STATES through your birth certificate registration?

You were born, or birthed into the UNITED STATES as a Debtor, a collateral, a slave, for the UNITED STATES government corporation as stated by your Birth Certificate, a Negotiable Security Instrument. Because you are a corporate entity of this trust and not a sovereign individual of the Republic, you are susceptible to things like income tax, property tax, being arrested, paying traffic tickets, and many other unlawful taxes (fees) which only go to fund the corporation and do not in any way fund public interests or services, and other unlawful statutes and rules (which are not actual laws that have been legislated by a act of Congress).

A marriage certificate or license states clearly that: The product of this union belongs to the UNITED STATES… YOU are the Product. You are a vessel of commerce that is owned by the UNITED STATES corporation. You are an indentured corporate debt slave, who was assigned as collateral for the full faith and credit of the UNITED STATES as soon as you are born.

Your Birth certificate trust value for your STRAWMAN, STRAW MAN, corporation identity is about 7 million dollars at birth. To verify how much you are worth as a corporate entity of the UNITED STATES, simply take your birth certificate and Social security number to your local stockbroker and ask him to look up your numbers.

Shortly after birth, you received a social security number (a corporate Taggingand Tracking number) for which you can conduct trade and commerce and are allowed the privilege to start businesses with which you are legally, but not necessarily lawfully taxed. Only a business is to be taxed on income under law, not individuals. You could give back your Social Security Number and not pay any more social security taxes.

Legal – The word legal or illegal is a corporate term used to represent a state of being when related to statutes, rules, codes, mandates, procedures, regulations, and posted limits that are assigned to you by the UNITED STATES judicial system. In the case of something being illegal, no living victim is required under corporate legality, and so the STATE assumes the role of the victim being harmed as the Creditor of your Strawman trust held by the government.

Your name that is in all capital letters on all government documents proves you are a STRAWMAN, STRAW MAN, (unnatural, commerce, corporate, made-up fiction) name that represents your trust account or reserve account that has millions of dollars waiting for you to claim, that was assigned to you at birth with a social security Taggingand Tracking number. This is why the UNITED STATES on your marriage and birth certificate, as well as your name, is printed in all CAPITAL LETTERS.

We can help you give back your STRAWMAN, STRAW MAN, identity so you can eliminate all of your debt lawfully and legally and give it back to the government, since that debt was a trick of a contract without disclosure by the State Government, Hospital, Doctor, and lending institutions that have already sold that contract on the stock exchange and received money and credit for it.